LAWRENCE — Three University of Kansas professors will receive a top book award in the field of public administration for their collaborative research on race and investigatory police stops as well as the ramifications of these institutionalized policies. 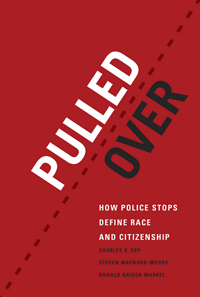 The research pertains to police practices and race relations, which have become major social issues in the last year after the deaths of Michael Brown in Ferguson, Missouri, and Eric Garner in New York. Both incidents led to nationwide protests and calls for reforming how police departments interact with minorities.

“In our assessment, 'Pulled Over' focuses on the timely and important topic of racial disparities in investigatory police stops,” said John C. Thomas, editor of The American Review of Public Administration and chair of the review committee. “Employing a strong research design and utilizing a variety of data, 'Pulled Over' documents how these stops reflect a form of institutional racism that undermines both racial equality and police-community relations.”

In research for the book, the authors found police disproportionately stop black and minority drivers to check for possible criminal activity, even when there is no evidence of it. They use minor traffic violations, like driving two miles over the speed limit, as a pretext for making these stops. The practice has eroded the black community’s trust in the police and negatively affected how minorities participate in civic life, according to the study, which included interviews with 2,329 drivers in the Kansas City metropolitan area who were pulled over in the past year.

Epp said the recent protests and national discussion over police shootings reflect people’s experiences in police stops. He said officers often ask black drivers questions like, “Where are you going? Why are you in this neighborhood?” The research showed this causes black drivers resent those kinds of intrusive questions, he said. White drivers, by contrast, typically experience brief stops for speeding and face few such questions, Epp said.

The New York Times reported earlier this week that a U.S. Department of Justice investigation into the Ferguson incident is expected to criticize how Ferguson police unfairly targeted black drivers for police stops in the St. Louis area community. The report is expected to find that black motorists in Ferguson were twice as likely to white drivers to be searched but less likely to be found in possession of contraband or guns, according to the Times.

"Our book does speak to that national discussion happening right now. We recommend that police departments prohibit their officers from carrying out these kinds of intrusive investigatory stops," Epp said. "By and large these stops harm people individually, and they drive down trust in police in the communities in which they are carried out."

Epp and Maynard-Moody have recently penned opinion pieces on racial profiling, investigatory police stops and rebuilding trust in Ferguson for the Washington Post and Washington Monthly.

Haider-Markel said the researchers found that the stops actually can make things more difficult for police officers in the long run.

Maynard-Moody said the investigatory stops are part of an institutionalized police practice that is widespread in departments across the country.

Epp and Maynard-Moody’s earlier books have been named two of the most important works of the past 20 years in a forthcoming book chapter, “Charting the ‘Classics’ in Law and Society: The Development of the Field over the Past Half-Century.” Co-authors Calvin Morrill and Kelsey Mayo of the University of California-Berkeley examine how the most-cited texts have defined three distinct phases of scholarship in the discipline.

Epp’s book, "The Rights Revolution: Lawyers, Activists, and Supreme Courts in Comparative Perspective," is second on the list of most-cited works since 1990, according to  Morrill and Mayo. "The Rights Revolution" provides a comparative analysis of civil rights in several countries, examining how increased access to the courts leads to more protection for these rights. Maynard-Moody’s book "Cops, Teachers, and Counselors: Stories from the Front Lines of Public Service," co-authored with Michael Musheno of the Berkeley School of Law, is in the top 20 as well. "Cops, Teachers, and Counselors," a collection of stories from street-level workers that illustrates how identity formation, law abidance and cultural adherence inform everyday decision-making, also received the SPAR Best Book Award in 2005.